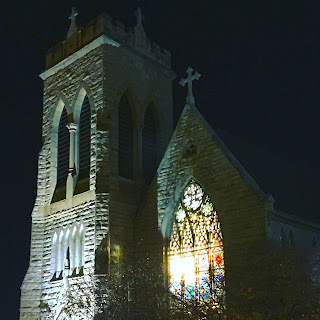 Trinity Cathedral's Praying Twice blog has ended. Thank you, faithful readers!
I am moving to a new position as Associate Professor of Church Music at Virginia Theological Seminary.  I will be writing more in the future, and I'll share a link when my new blog is up and running.
Marty Wheeler Burnett, D.Min.
Post a Comment
Read more

We celebrate the gift of the Holy Spirit at Pentecost. Today, we will hear organ settings of two classic Pentecost hymns.
"Nun bitten wir den Heiligen Geist" ("We pray now to the Holy Spirit") is a German hymn. The first stanza dates to the Middle Ages, and additional stanzas were added by Martin Luther in the 16th century. The tune appears in organ chorales (organ compositions based on Lutheran chorale tunes) and cantatas by several Baroque composers, including this setting by Dietrich Buxtehude (1637-1707). Hear the authentic sound in this video recorded on a Silberman pipe organ built in  1721: Nun bitten wir
The organ postlude is a setting of the great plainsong hymn, Veni Creator Spiritus ("Come Holy Ghost, our souls inspire"). This hymn dates from the 9th century and is typically sung on Pentecost and at ordinations. Originally in Latin, the hymn is found in an English translation in The Hymnal 1982 #504. Hear the music…
Post a Comment
Read more

All Hail the Power 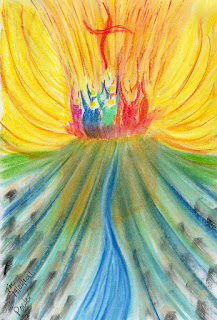 This Sunday, we'll hear organ arrangements of two classic hymns for the Seventh Sunday of Easter.

"All hail the power of Jesus' Name!" combines a text and tune from the 18th century. It is regularly ranked as one of the most popular hymns among Episcopalians and at one point was nicknamed the "national anthem of Christendom." The text is full of scripture references. The tune, Coronation by Oliver Holden, is described in The Hymnal 1982 Companion as "the most often printed and most frequently used of the eighteenth-century American hymn tunes." This hymn is foun…
Post a Comment
Read more 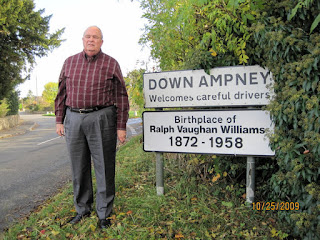 
Come down, O Love divine,
seek thou this soul of mine,
and visit it with thine own ardor glowing;
O Comforter, draw near,
within my heart appear,
and kindle it, thy holy flame bestowing.

This beloved hymn was written by Bianco da Siena (c. 1367-1434), an Italian mystic poet. Very little is known of his life, but several of his hymns survive in English translations. The translation by 19th century poet Richard Frederick Littledale in The Hymnal 1982 is an example of the Romantic era's fascination with the Middle Ages. A priest and prolific author, Littledale is best known for this classic hymn.

The tune was composed by the 20th century British composer, Ralph Vaughan Williams (1872-1958). It is named for Vaughan Williams' birthplace and was composed specifically for this text. The Hymnal 1982 Companion notes: "It has a very satisfying rhythmical structure typical of the composer, with the poise of the longer notes in the short lines and the …
Post a Comment
Read more 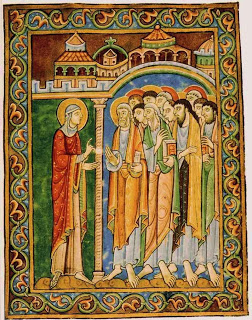 As we celebrate the Great Fifty Days of Easter, we continue to explore the great hymns of the season. Today's organ prelude is a setting of an important hymn in the history of church music. Victimae paschali laudes ("Christians, to the Paschal victim"), comes to us from the Middle Ages. The tune dates from the 11th century, and multiple documents dating to the 14th century and earlier contain the text. Episcopal congregations first experienced singing this hymn in The Hymnal 1940. Hear a recording of the hymn in the original Latin: Victimae Paschali laudes

Note that in this hymn, Mary speaks. Here is the English translation from The Hymnal 1982, #183:

Christians, to the Paschal victim
offer your thankful praises!

A lamb the sheep redeemeth:
Christ, who only is sinless,
reconcileth sinners to the Father.

Death and life have contended
in that combat stupendous:
the Prince of life, who died, reigns immortal.

The King of Love 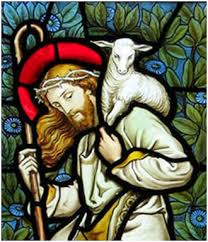 Known as "Good Shepherd Sunday," the Fourth Sunday of Easter is a day when we read or sing Psalm 23. Can you recall a musical setting of this psalm that you have sung? The most familiar setting in The Hymnal 1982 is "The King of Love my shepherd is," a metrical paraphrase of the psalm (St. Columba, Hymn 645). Try singing along with this recording, using the lyrics posted in the comments The King of Love .

If you are a choir member, the choral setting by Thomas Matthews is a favorite: The Lord Is My Shepherd (Matthews). Are you a BBC fan? Howard Goodall's setting of Psalm 23 is also known as the theme from The Vicar of Dibley: The Lord Is My Shepherd. Try listening to several settings of Psalm 23 this week and reflect on how each composer  interprets and expresses the familiar text through music. 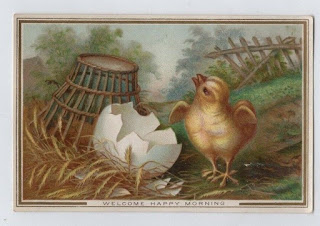 Even though we can't gather to sing during the COVID-19 pandemic, we're sharing the great hymns of the Easter season during our weekly Facebook Live broadcasts. Worship with us at Trinity Cathedral Omaha on Sundays at 9:00 a.m. CDT.


"Welcome, happy morning" is a favorite hymn among many Episcopalians. Its references to springtime, blooming flowers, and "days of lengthening light" draw parallels between earth's seasons - at least in the northern hemisphere - and Christ's resurrection. Hear a recording: Welcome, happy morning!


The original Latin text dates from the sixth century and is drawn from a 114-line poem by Venantius Fortunatus. A popular hymn in the Middle Ages, it was translated into German in the 14th and 15th centuries. It is mentioned in correspondence between Archbishop Cranmer and King Henry VIII, and it was the first Latin hymn translated into English for church use. The translation we use today w…
Post a Comment
Read more
More posts

Marty Wheeler Burnett
I'm a choral conductor, organist, and composer serving as Canon Precentor at Trinity Episcopal Cathedral in Omaha, Nebraska. A native Texan, I worked in Mississippi and Tennessee prior to moving here in 2003. I'm currently serving as President of the Association of Anglican Musicians.